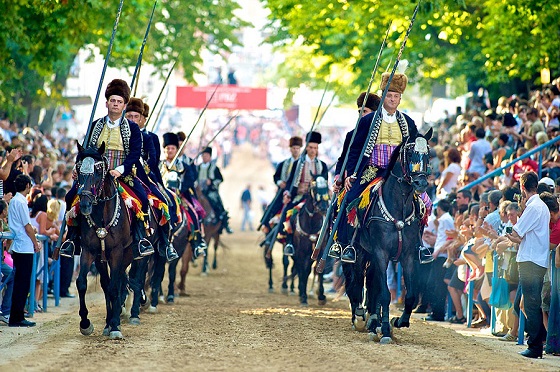 In centuries gone by, there were to be found all over Europe – proud knights who fought with bravery and honour.

Today they are all but extinct, except for one tiny corner of a small country in south-eastern Europe, where every August the site of proud knights at full gallop, their lances at the ready, can be witnessed in the last knights tournament in Europe.

On the first weekend of August, national attention in Croatia turns to the inland Dalmatian town of Sinj, a sort 30-minute drive north of Split, where the annual Sinj Alka tournament takes place as it has done every year since 1715, when the town’s fighters managed to overcome the much larger Ottoman force in the Siege of Sinj.

The tournament attracts live national television coverage, as well as visits from various Croatian dignitaries including the Croatian President, as they watch the horsemen of Sinj compete to become the Alka champion, as they take turns to gallop aiming to lance a metal circle hanging halfway down a street which is converted to the Alka terrain each year for the tournament.

Piercing the alka ring takes true precision, with the true masters able to pierce the inner circle for maximum points. It is a great honour to become an Alka, an honour only bestowed on men born in the Sinj area.

It is a wonderful time to visit Sinj, which is one of Central Dalmatia’s most historic towns, but if you cannot be there for the event itself, a wonderful interactive Alka Museum was opened in 2015, making the rich history of this 300 year-old tradition available to visitors twelve months a year.