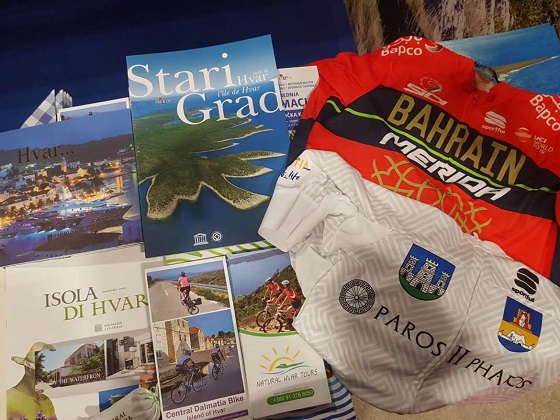 Famous for its beaches, nightlife and endless sunshine, the island of Hvar has been busy adding several other strings to its tourism bow in recent years, including cycling.

Working with the Central Dalmatian Tourist Board on a strategy of developing cycling tourism, a number of bike routes have been marked and a map produced, enabling cyclists the potential to explore the island like never before.

And it is not only the tourists who like what they see. Bahrain McLaren (formerly Bahrain Merida) were recently on the island for the third December in a row for their winter training ahead of another gruelling season. And if one of the world’s top cycling teams keep coming back for more, you know Hvar is onto something!

The island’s five tourist boards, which recently merged into one Destination Management Organisation, have been on the road to promote Hvar’s cycling story, the latest trip to Italy, a key cycling tourism market. And there was strong Hvar (and Central Dalmatian) presence at last month’s Cosmo Bike Show in Verona, where there was plenty of interest in the Croatian cycling product.

“On the Italian market Hvar is an absolute hit this year, which is shown by more than 15000 visitors of the Croatian stand at the Cosmo bike show in Verona. And we are proud to promote Hvar bike tourism product with all Hvar tourist boards as one,” said Petar Razovic, director of the Hvar Town Tourist Board.

Learn more about the beauties of cycling on Hvar and neighbouring Brac in this official Central Dalmatian tourism video, which has already been viewed more than 4 million times.