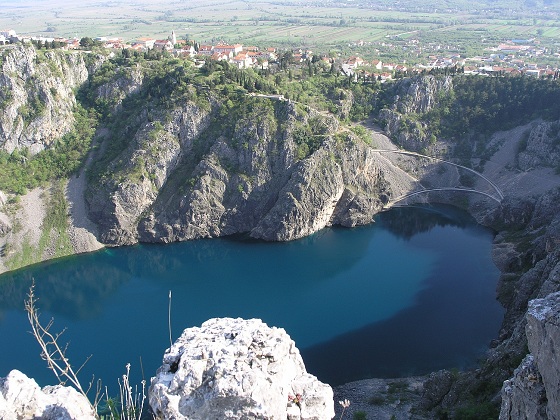 Water is never far away from a typical holiday in Dalmatia, and with the region’s stunning coastline, beaches and islands, the Adriatic Sea is by far its most popular water attraction. Look a little further, however, and discover some of the most popular day trips from places such as Split – Krka waterfalls and Plitvice Lakes.

Look a little further, a little more off the beaten track, and discover something truly magical and unique – the Red and Blue Lakes at Imotski. Imotski is a fascinating hilltop town close to the Bosnian border, about 90km and an hour and a half drive from Split, relatively undiscovered in a region full of surprises.

Where else in the world, for example, does a deep lake become a football pitch? 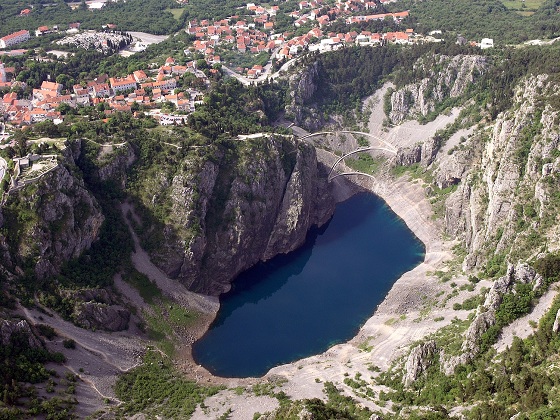 The Blue Lake (Modro Jezero) on the edge of town is a fascinating natural phenomenon of a lake with a depth of up to 147m (in 1914) which completely disappears in the summer, leaving a base dry enough so that the annual football match between the Elves and the Werewolves can take place on the flat lake basin on a dry, solid pitch.

The deep blue of the lake has its own magic, and it is guarded by a large crater which is up to 800 metres long and 500m2 wide. It is the natural swimming destination for the local people, a place to enjoy and respect nature.

As the summer wears on, the water level reduces and eventually becomes bone dry, at which point the lake is transformed into a stunning hiking destination with spectacular views all around. The depth of the lake from the upper rim is some 220m and a helpful hiking trail was built in 1907. To get a flavour of the dry lake, the video below filmed the football match at the bottom of Blue Lake.

The lake remains dry until the snow melting in the Spring, and the underwater springs begin to fill again, raising the level of the lake with its gorgeous blue.

In stark contrast to the fluctuating wet and dry spells of the Blue Lake, the Red Lake has an entirely different feel and history.

The first recorded description of the Red Lake is attributed to the Venitian military commander, Ivan Zuane Franceschi  in a letter to a friend, after the liberation of Imotski from Turks in 1717: 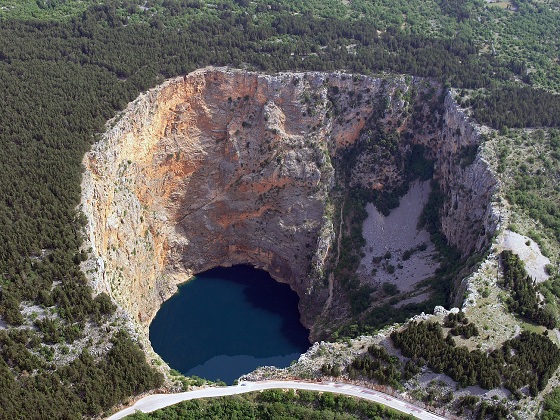 I think I was more terrified and impressed when I saw the second abyss (first, was Blue Lake, auth. Remark). On, almost flat top of the hill, in living stone, as if the hand of an artist carved a big circle, with sound of hammer and chisel, and dug it vertically like some very deep well. Crater has more then half a mile in circumference, it is cut downright in volume with no bottom. It is a red stone, with no bush or sprig to give comfort to these dreadful cliffs. When you see these chasms, you ask yourself in fear; how did they become? Were they made like this from their first creation, or is it some underground volcano, now at rest, with its mouth wide-open spewing lava and underground rocks? (La Dalmazia, 1846, no. 10)

According to local legend, Gavan’s estate collapsed into the lake after an angel – dressed as a beggar – warned Gavan’s wife about righteousness and charity, to be met with the reply:

“I don’t have need for your God, while I have my Gavan!”, and refused to give him alms. At that moment, the ground shook, and Gavan and his estate fell in the abyss. The abyss filled with water and the howling of evil supernatural beings can still be heard today. The legend was recorded in 1937 by Friar Silvestar Kutleša, and there are local folk songs related to the event.

A more scientific explanation for the appearance of the lake is attributed to the collapsing of underground water caves in a region which suffers from occasional earthquakes. The first geological research of the lake was conducted in 1937 by Academic Josip Roglić, but it was not until the 1950s when Milivoj Petrik discovered the lowest part of the lake at just 4.1m above sea level, and the highest point at 274.5m. It is one of the deepest speleological caves in the world, of Dinarides karst, and was placed under protection in 1964.

Both lakes are stunning natural attractions, and just some of the surprises which await the visitor interesting in exploring inland Dalmatia. There is plenty more to discover in the Imotski region, just a short distance from the coast and a world away from the crowds. Why not find out for yourself, starting with the Imotski Tourist Board website?