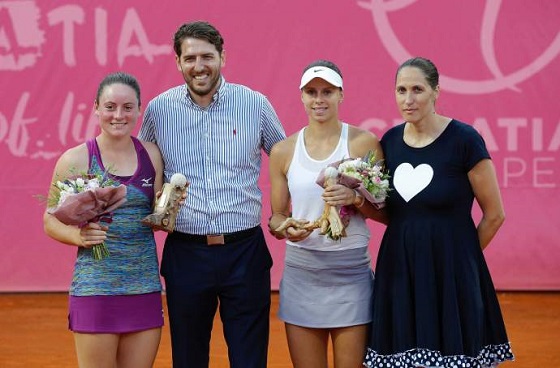 Did you know that Central Dalmatia boasts its very own ATP tennis event on a gorgeous island?

The region is well-known for its sporting prowess, including tennis – a certain Goran Ivanisevic is from Split after all – and the addition of the WTA Croatia Bol Open on Brac four years ago has helped lift the sport’s profile in the region further still. The ladies’ event took place once more in Bol, and there was a packed crowd for the final.

In front of packed stands at the Bluesun tennis centre, Slovenian tennis player Tamara Zidanšek won the third edition of WTA Croatia Bol Open. This was the fourth WTA tournament appearance for the 20-year-old player, her first final and the first WTA title in her career! In the final match with a score of 6:1, 6:3, Zidanšek defeated Polish player Magda Linette, who played an excellent tournament overall.

“We had the best tennis tournament so far. We have the smallest budget on the WTA Tour, but we are the best in this category. We saw the top tennis in the final, and these girls will be in the spotlight for a long time. I am proud of my team and everything they have done. Only 60 cities in the world have a WTA license, we are the only WTA125k series in this part of the world, in Southeast Europe. WTA is officially the world’s strongest brand in women’s sport and despite all the obstacles and the lack of support from state institutions responsible for developing sports in our country, there is the Dalmatian atmosphere that WTA will have in Bol,” said tournament director Feliks Lukas.

To learn more about the island of Brac, click here.