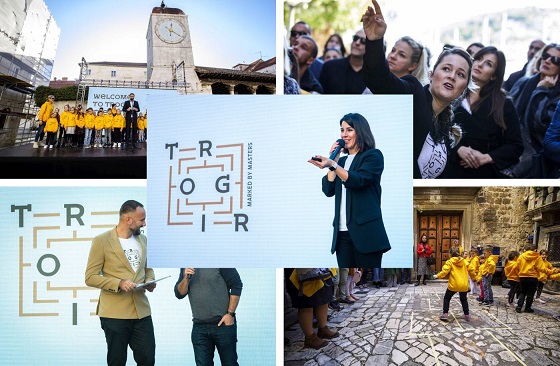 A new look and feel for one of Central Dalmatia’s tourism jewels, as the town of Trogir last month became the first destination in all Croatia to brand its destination.

A very detailed study and research into all aspects of Trogir resulted in a new visual identity for the town, as well as a new slogan, Trogir, Marked by Masters. With so many masters contributing to the greatness of this unique UNESCO World Heritage Site over the last three millennia, several of Trogir’s modern masters were not only on hand at the launch of the brand on the main square, but also played a starring role in the new promotional video, which you can watch below.

The logo is based on an old Dalmatian game ‘trlja’, which has been played for centuries by children in the streets and squares of the old town, as it was again on launch day, as children from the local kindergarten came out to play a variety of traditional games in their newly-branded yellow hoodies.

A wonderful day, and a wonderful initiative. Learn more about the magic of Trogir here.