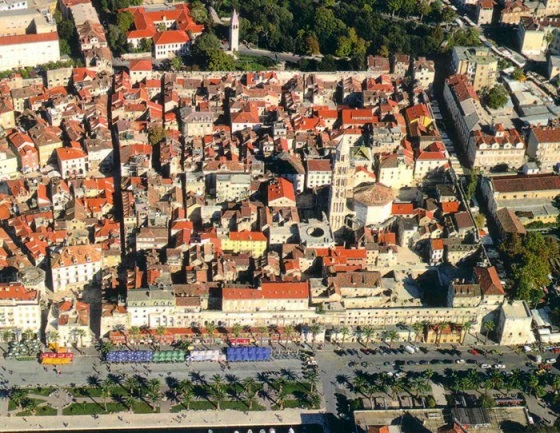 Where to retire when you are coming to the end of your career as a real Roman Emperor?

Let’s go back 1700 years to the dilemma that Emperor Diocletian had. A location close to the sea, with spectacular views and a temperate climate, whose local stone could be used to build a palace fit for his retirement. A home that would not only outlive him, but some 1700 years later be one of the most popular tourist destinations on the Adriatic coast, as well as a UNESCO World Heritage Site.

Diocletian’s Palace is the heart of tourism in Split, its cobbled streets and alleys holding the secrets of centuries of different inhabitants, and one which today is seeing a resurgence in life due to the tourist boom.

Did we mention UNESCO World Heritage Sites? While the location that Diocletian found was virgin territory at the time, he was about 700 years late if he wanted to claim the founding of the first UNESCO World Heritage Site in the region, for it was in 385 BC that the Ancient Greeks sailed in from the island of Paros to a deep bay on what today is known as the island of Hvar, founding the settelement of Faros (Stari Grad today) and an agricultural colony close by which today is the largest cultivated field on the Adriatic, with faming methods almost unchanged from the agricultural colony introduced by the Greeks 2400 years ago.

The Stari Grad Plain became a UNESCO World Heritage Site in 2008, one of four to be found in Central Dalmatia (the old town of Trogir and the stecchi stones near Imotski are the others), and these do not include the oldest public theatre in Europe of the fabulous ruins of Ancient Salona.

With a project to open up the Roman roads of the region taking shape there has never been a better time to discover the heritage of the Central Dalmatian region.