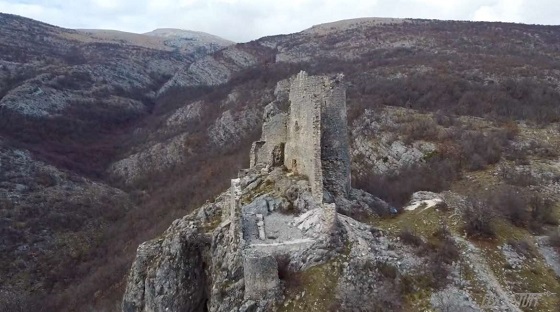 The Cetina River is the lifeblood of Dalmatia, and its 100km+ length from its source near Vrlika to the Adriatic is one of beauty, adventure sports, and fascinating history. For this is a region which was both pirate country and the front line from Ottoman invaders.

Look up from its waters and you will see no less than seven fortresses guarding its strategic points, each with their own tales to tell.

And now take a good close up at two of the main fortresses, Glavas and Nutjak, courtesy of some great aerial footage by EdoStuff Aviation, complete with introductory comments:

North of the source of the Cetina river, during the 14th and 15th century, the Glavas fort was built. The Venetian maps record it under the name Dinarić, because it stands under the mountain Dinara. The fort was erected to oversee an important trade route to Bosnia, and was the first line of defense against the Ottoman forces.

Nutjak fortress is located downstream from the town of Trilj. It can be found on the rock above the right bank of the river Cetina. Nutjak was built at the end of the 15th century by Žarko Dražojević, the Duke of Poljica, in order to protect the village west of the Cetina river from the Ottoman irruption.