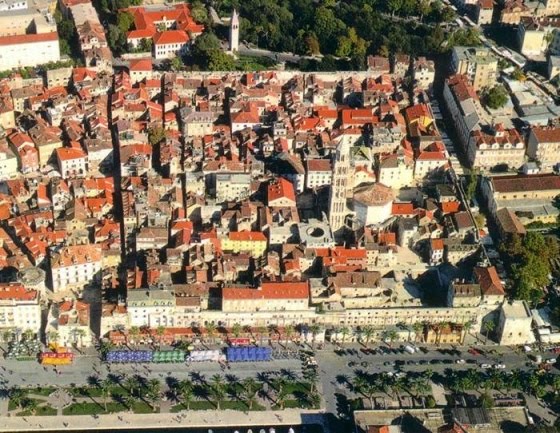 It is the most famous attraction in Split and one which has been with the city from the very start. When Emperor Diocletian was looking for a retirement home, he could hardly have chosen a better spot than this quiet and idyllic spot on the Dalmatian coast. Little did he know, perhaps, that it would become one of the hottest tourist destinations in Europe over 1700 later.

The palace, constructed in 325 AD, still bears the name of the Roman Emperor, and it has undergone much change and history since then, but it has always remained a central focal point for the city.

And nowhere more than today, as the warren of old historic streets are now alive with tourist outlets catering the increasing number of visitors to the city.

Diocletian’s Palace has achieved much recognition over the centuries, including in 1979 when it was declared a UNESCO World Heritage Site, along with the old town of Dubrovnik and Plitvice Lakes. Three quality Croatian attractions which are celebrating their 40-year UNESCO birthdays this month.

Central Dalmatia is home to more UNESCO heritage, both the intangible heritage as well as three more World Heritage Sites – the old town of Trogir, the Stari Grad Plain, and the stecci tombstones of inland Dalmatia. And if you are looking for a UNESCO island to visit, choose Hvar, which has more UNESCO heritage (5 intangible and 1 World Heritage Site) than any island in the world.

Take a tour of the official UNESCO video on Diocletian’s Palace below.