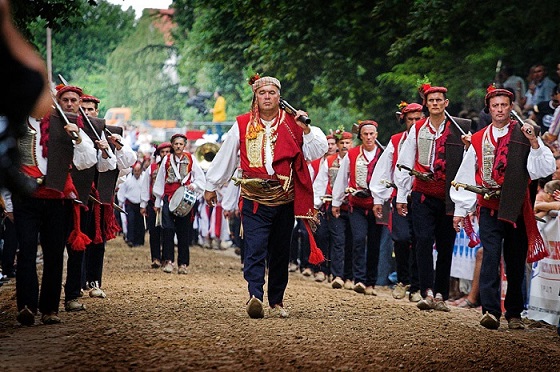 Of all the fabulous events of 2013 in Dalmatia, the one I am most looking forward to is the Sinj Alka in a couple of months. I was delighted to receive an invitation for one of the region’s most individual traditions, and I will be covering the event for Google News and the Central Dalmatian Tourist Board.
Tickets for the main event are almost impossible to find, but the good news is that there are two events before the main Alka called The Bara and The Coja, where participants perform without the traditional dress, and entrance to both days is free. Details below. Preparations for the Alka are ongoing, and dress rehearsals take place daily from 18:00 – 20:00 from Monday to Friday until the Alka on August 4. For more information about the Alka, read on below, or check out the Sinj Tourist Board website.

THE ALKA OF SINJ (Knights’ tournament) was the best cultural event in the framework of the ״Doživi Hrvatsku – Experience Croatia 2012״ project.
The Alka of Sinj was inscribed in 2010 on the Representative List of the Intangible Cultural Heritage of Humanity (UNESCO).

In honour of its heavenly patroness the Madonna of Sinj, who, according to the tradition, forced the Turks into flight in 1715, as an eternal vow of devotion and respect, the people of Sinj instituted the Alka – the knightly tournament of Sinj, and thus each year on the first Sunday in August the glorious victory is revived. The tournament of Alka originated at the time when there were many similar knightly tournaments in Europe. All of them have now fallen into oblivion, except the Alka Tournament of Sinj, which is at the dawn of its three hundredth anniversary and under the protection of UNESCO as world’s intangible heritage.