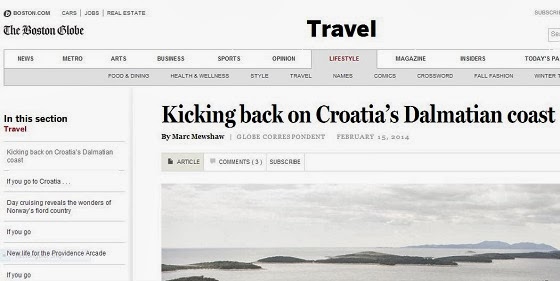 With its pristine waters, plethora of emerald islands and endless sunshine, it is little wonder that Central Dalmatia is a perfect sailing destination, something that we have known for decades, but has only recently come to the attention of the international media.

SPLIT — From the deck of our boat we watched a spectacle that had everyone in this bustling port city spellbound: a river of sailboats streaming out from the harbor to a sparkling turquoise horizon. Though Croatia had just joined the European Union and marked its 22d year of independence, the talk of the town was of a smaller but perhaps equally telling milestone, the record turnout for the opening day of Yacht Week 2013.

It was a sign of the times. Long a bargain destination offering sun and pebbly beaches to the masses, Croatia is fast evolving into a haven for sophisticated boaters. With modern marinas, a food and wine scene that’s the envy of central Europe, and a charter yachting industry catering to all budgets, it is rapidly whittling market share from more established sailing spots such as Turkey and Greece. Read more…