The Central Dalmatia Tourist Board is delighted to announce that it has reached 100,000 Facebook fans!
Thank you for your interest and support. The Facebook page has grown quickly and has been a great platform for us to share the beauty and magic of this special region. We look forward to rewarding our fans with more great photos and information about the region going into the 2014 season. Not a fan yet? Click here to visit the Facebook page.

While 100,000 fans is one milestone, the next number to watch is on our Youtube channel, where our four videos are close to 2 million views. The most popular, Hvar Dynamic Postcard, is closing on a million views. Check it out below.

Thank you for your interest and support. 2014 is going to be an exciting season. 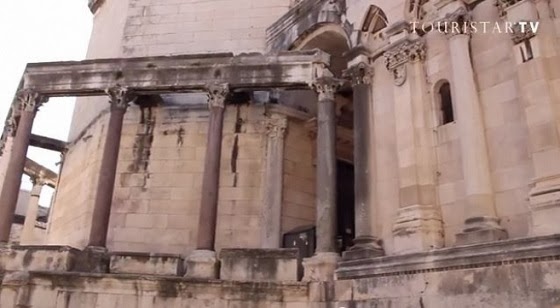 Award-winning producer Ashley Colburn is back, with a new series about Croatia. Colburn, who won an Emmy Award with her Wow Croatia documentary, returned to Croatia last year to produce a new programme for Touristar TV about the country, including a visit to Split.

A tour of Diocletian’s Palace below – did you learn something new?
//www.youtube.com/v/zNSk7oeI5-o?hl=en_GB&version=3

It may be a little cold for most of us to swim, but there is nothing wrong with dreaming of the summer during a cold winter. With so many quality beaches around, it is never to early to start thinking of those lazy days in the sun. So welcome to Beach of the Week, where we will be highlighting some of the top – and some of the hidden – beaches of Dalmatia. And we start with what many people seek, but few find – a sandy beach near Hvar Town.
The Pakleni Islands opposite Hvar Town look very inviting, and many tourists head out on the numerous water taxis to spend a day at the beach. There is plenty to choose from, including CNN’s top naturist beach for 2011 at Jerolim, and the popular bay of Palmižana.
While many of the beaches on Hvar are rocky or consist of small pebbles, there are a few sandy beaches to seek out if that is your preference. One of them is called Perna in the next bay round from Palmižana, reached by water taxi. We could spend words describing it, but why bother when the Hvar Town Tourist Board do such a good job in pictures…

For many, the island stops at Jelsa. The majority of tourism is concentrated on the western side of the island – Hvar Town, Stari Grad, Jelsa, Vrboska, Ivan Dolac, Zavala – and most people who do venture further east are only doing so to make the ferry at Sucuraj.
This is a shame, as the eastern half of Hvar is arguably even more beautiful, and it certainly has its own treasures for those wanting to explore. Here are five things not to miss.
1. One of the oldest olive trees in the world at Zastrazisce

It was one of the most interesting little excursions of last year – a trip east to find the oldest olive tree on Hvar. To be honest I was not expecting much, but decided to check it out in combination with some other things on the eastern side, but I was soon standing back in awe. To give you a feeling of how impressive this majestic tree is, I asked my daughter to climb into the middle of it. The tree is now protected, and some Italian specialists have dated it at 500 years before Christ, which a quick check of the Internet will tell you it is one of the ten oldest olive trees in the world. Whatever its age, it is magnificent. Not that easy to find, though, and you will have to ask in the village of Zastrazisce.
2. The fabulous Gdinj bays

Living in Jelsa, we are a little spoiled for choice with beaches, but one thing that eastern Hvar has in abundance is great beaches and, because most people choose to stay on the western side, they are much more deserted. One fabulous place to check out is the so-called Gdinj Bays, on the southern side of the island – turn right by the church coming from Jelsa, and prepare for a hairy and winding descent – and you are soon presented with a string of fabulous beaches in small bays, most with a bar or restaurant. Check out more info here.
3. The largest island vineyard in the Mediterranean

I drove along the road to Sucuraj for years without knowing about the secret on top of the island – the largest single vineyard on the Adriatic islands, some 261 hectares in all once planted. About 10% is currently under cultivation, but to give you an idea of the impact it could make on the Hvar wine scene, the island used to have 5700 hectares under cultivation, but these days it is just 280, so once this vineyard is fully planted, it will almost double production on Hvar.
It is an impressive 4.7 km long, and an incredible amount of work has gone into it crushing stones. It belongs to the Plancic winery in Vrbanj.
4. Croatia’s premier eco-ethno village

There is much talk these days about developing eco-ethno tourist attractions, and nowhere in Dalmatia has more treasures in this department than Hvar. Top of the list is the magical shepherd’s village of Humac, just 6km east of Jelsa. Totally abandoned and fully protected as an eco-ethno village, there are few places with more atmosphere or clues of life in Dalmatia in years gone by. The excellent Konoba Humac at the front of the village is one of the best dining experiences on the island, while it is possible to stay in the village. No running water or electricity here, but there are tours to the outstanding Neolithic Cave of Grapceva – check it out here.
5. The magical Stinivas

The most bizarre road on the island is located on the edge of Poljica. Take the turn north to Mala Stiniva and eventually you will come to a fork. Turn right and it leads nowhere, ending abruptly above a bay you have to scramble down to reach. Turn left and it stops high above another bay with a small settlement with no car access. Mala Stiniva, one of the most picturesque places on the island.
Continue along the main road past Poljica to Zastrazisce, and another left turn brings you to the impressive Vela Stiniva, with its impressive and imposing cliffs, cliffs which have made it one of the most popular places for rock climbing on Hvar. For more information about climbing.
The 2014 season in Central Dalmatia is expected to have a new type of tourist – fans of the hit series Game of Thrones, whose fourth season will air this April. If the knock-on effect on tourism in Dubrovnik in the last series is anything to go by, there will be more than a few fans looking to visit the locations where the series was filmed.

Filming in Croatia last year took place in various locations in the region – Diocletian’s Palace in Split, Klis Fortress, Zrnovnica Quarry and Dubrovnik. An official trailer has been released (see below), and here are some screenshots of some familiar places. Do you recognise them?

Here is the trailer
//www.youtube.com/v/B_YktnQRGB8?hl=en_GB&version=3